Located in North Malé Atoll, Pasta Point is a crazy-awesome dive spot. It’s often called a wave-machine. For good reason too, because the swells are continuous and impressive!

Pasta Point swells reach average heights of 4-6 feet. These lefthanders are not interrupted by sudden winds and often roll unbroken for a smooth ride. The waves are beautifully identical; even the 1-2 feet waves break like their taller brethren, with a satisfying curl. Plus, it’s easy to access. It’s an absolute favorite among surfers in the Maldives.

Pasta Point belongs exclusively to Cinnamon Island Dhonveli Resort They accommodate up to thirty surfers at a time. You won’t be welcome at Pasta Point unless you b.ook a stay at the resort. This policy ensures that the resort’s surf break is not crowded, allowing each surfer to have the full experience of Pasta Point unhindered. Besides, a stay at the four-star resort will further enrich your vacation to the Maldives, especially with some good packages.

The best time to surf at Pasta Point is May through to August. That’s when southern swells are incredibly consistent, thanks to the south to southwest winds being offshore in that period. Surfers of medium and advanced skill levels will find this surf break a satisfying experience.

Pasta Point is basically made up of three points. When the time is right, and with a keen surfer’s mind, these three points can be ridden in one go. Done right, it could be an uninterrupted 100-yard ride! It’s also very close to other prime surf points: righthander swells Sultans and Jailbreak, and lefthander Honky’s, all within ten-minutes distance by boat from Cinnamon Island Dhonveli Resort.

Holiday Deal of the Year for the Maldives

The Maldives has opened up 18 new islands for resort development. 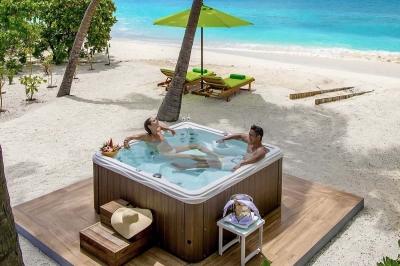 Emerald Maldives Resort is one best and famous all inclusive resort . A collection of luxury private beach villas and overwater bungalows, many with ...