Have you seen the Sea of Stars?

Have you seen the Sea of Stars?

If you share what goes viral, you've probably seen these images of the Sea of Stars Maldives.

Bioluminescence in the Maldives' waters is not a new phenomenon. All you have to do at night is run your fingers through the water to see a bluish glitter. These are phytoplankton in the water reacting to a disturbance.

Glittery phytoplankton, on the other hand, takes a back seat in the phenomenon known as the Sea of Stars.

The 'Sea of Stars' became famous because it lasts longer and, as a result, appears clearly on long-exposure photography. Because these shoreline light shows are held by creatures known as ostracod crustaceans, they last longer than typical plankton bioluminescence. They're crab and shrimp's little cousins. If they are disturbed, they can glow for up to a minute.

This phenomenon can be seen on several islands in the Maldives. The most well-known sighting location, however, is Vaadoo Island in Raa Atoll.

Throughout the year, the phenomenon can be seen in varying degrees of intensity. However, it is highly unpredictable. It's impossible to say when these little guys will start lighting up the beach. It simply occurs as the number of ostracod crustaceans washing up on the shore increases. 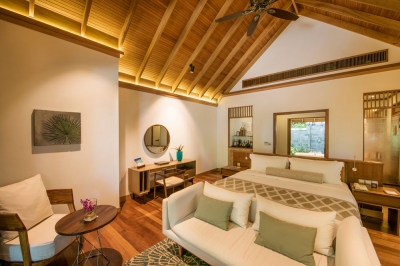 Deluxe Villa Package Half Board Package

Baros Maldives is a small luxury island, six-time winner of the World’s most romantic resort and just 25 minutes ride by speedboat from  Velaana I...